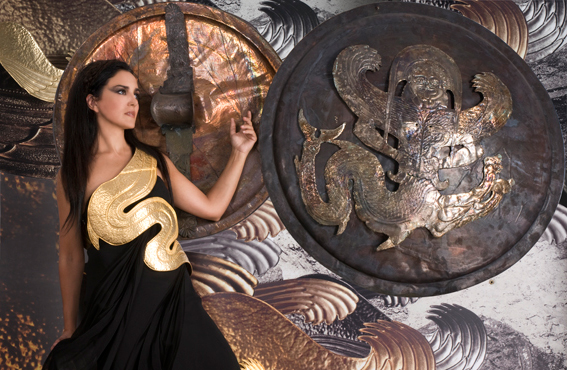 Vassiliki Theodorakidi creates sculptures, and representations, compiles stories and emotions, by following a creative path, wishing for an equal relation between the arts, aspiring for their coexistence that leads to a result through which the sum is greater than its individual parts. The references are based on Ancient Greece, the cultures of the Minoan and Mycenaean era, on Athens in its classical period, and on the grandeur of the Macedonian kingdom, in a time when the extroversion of the Greek spirit and its ability to work as a melting pot set the foundations for its historicity throughout the centuries.

Vassiliki takes a second look at images that are familiar, and manages to observe again what is taken - light heartedly - for granted. Therefore the spiral move of the embossed ivy on the ancient column capital becomes autonomous and is transformed to a precious sculpture, embracing the human arm, reaching up the shoulder. The handle of an ancient dagger, destined to arm the hand of a warrior, abandons its initial role, and by wrapping it gently manages to tame it. The horrible image of his shield, continuing its protective role, embraces in a suffocating, yet harmonious, manner the human body, keeping it inside forever.

Points - elements - symbol refer to the eternal diptych of love, war and death.

Time is for Vassiliki a concept different from its strict, rationale, linear conception. As a result, she manages to take us on a journey combining the ancient with the modern, the past with the current. Antiquity and presence, West and East, technology and tradition, the artistic and the humane, all are parts of a creative dialogue, coexisting with her total oeuvre.
Personal Statement

It is crucial for me to create works that provoke
thought in my viewer.

My inspiration lies in the endless and fascinating history of human expression as seen through the centuries. I need to escape from the strict, linear, or rational conception of time in order to travel
Back and forth.

I feel the need to turn history into art; not as narrative but rather, as a contrapuntal dialogue acting as signifier for future endeavors.

In this discourse, the viewer can be free to choose his own truth.

The sense of truth, according to the Greek Philosopher Aristotle, lies in the perpetual human effort to escape from oblivion
(oblivion = lithi, truth = a – lithia)

Thus, by seeking memory we reach into ourselves for the ultimate truth in an effort not only to avoid repeated mistakes but,
also to attain perfection.

Through this converging inquiry, themes such as being, becoming, love, hate, conflict or death come to light foiled within artistic dialogues.

The spiral move of the embossed ivy on the ancient column capital becomes autonomous and is transformed to a precious sculpture – bracelet, embracing the human arm and becoming part
and extension of ourselves.

Endless journey on the paths of human expression which never saturates but instead constantly seeks new stimuli for creation.

The legacy of the past
has life,
has breath,
it comes to awake in us
truths and sentiments…